Reveille Peak Ranch has been a very popular destination throughout the years; from various OCR races series to other popular trail running series. Who can blame them though? Reveille Peak Ranch is less than an hour from the nearest airport, and it opens you to the Hill Country with some magnificent views full of potential. This year, though, the interest came from the buzz about what Spartan had cooking course wise. Spartan looked to reinvent this Spartan classic venue. The addition of the Time Trails Friday rejuvenated the weekend.

I have been very hard on Spartan for some very poor parking management in the past. So when they get it right, I really want to commend them. Spartan made sure camping and parking sites were in areas protected from the rain. Prepared for when the rain hit, everyone wasn’t flooded as they had been in previous seasons. This time around, Spartan was prepared to make sure that they didn’t mess around when the rain hit. They brought both the parking and festival area to high ground keeping everyone in a relatively safe position. 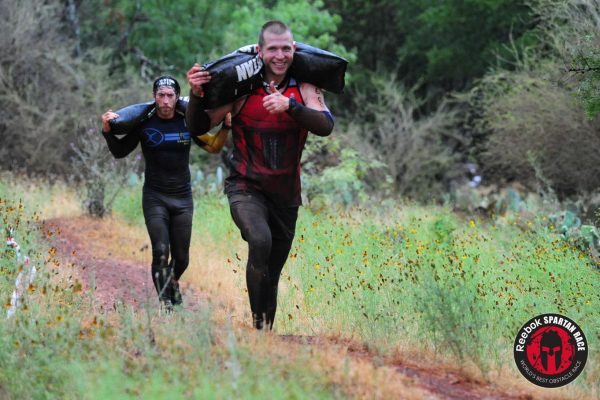 The check-in process is standardized, but the new system showed some significant holes. The new system is heavily dependent on mobile broadband connectivity to function. While testing of these systems went well pre-race, add 10,000 smartphones to the available bandwidth, sprinkle in thunderstorms, and it brought things to a halt, with many racers ultimately being processed manually. I totally understand the concept of this system, and when functioning, it is superior to old methods. The problem is one hiccup, and it all comes easily crashing down and diminishes the racer experience, especially for that precious 1st timer wanting to see their time but being told to wait until Monday.

Bag Check, as usual, is a solid set up but I was surprised to see it so open since the forecast called for a stormy weekend. The new system was still in place to manage pass holders, Elites, the largest team, and general participants’ teams with solid security. For me, a bag check that you don’t think about is a top end bag check – it simply worked seamlessly.

Maybe I am partial because I helped build it, but I thought the festival area was very well constructed. In all seriousness though, even with the mud bath, it was a great environment.  Great music filled the air, Mylo’s Obstacle Fitness was there, Homeplate Peanut Butter, Clif, Accent, Optimum Nutrition, LifeAid, and an amazing food vendor row was on tap with a multitude of smaller vendors.  It had a good buzz about it. People were mostly happy even if they had a manual check-in process to deal with. The only odd thing was they hid the Results and Finisher Shirts tents behind a big Budweiser trailer. Many a lost Spartan had trouble finding each. It was a common question I heard in the festival area, the second most being where are the bathrooms.

The course was a definite step up from previous Supers I had run here in years past. A theme of the terrain was steep climbs and steep descents. Typically, this course would have one or two steep climbs, but the hills were longer and not as steep. The only negative I had about the route was poor markings. Personally, I was with a group that got lost and were forced to backtrack. Many on the boards spoke about how they got lost, or they complained saying it was so short. Only then to find out they cut a third of the course by accident. Reported GPS distances were as low as the upper 6 miles to the low 10 miles, with an official distance of 8.88 miles. Staff had to go out and tape things up to repair lost tape from the night before in the middle of the event. Either way, an opportunity for improvement, and sometimes Mother Nature just has her way of getting in the way.

The obstacles were well laid out to present a solid challenge. Olympus returned to Texas, the Yokohama Tires debuted, and Twister also got its first crack at the Lone Star State. One issue that did come from the tire flip was some very inconsistent policing of the obstacle for the Elites. Some racers were told to do two total flips, while others were told four. Some saw the backlog and skipped it all together, freely passing course marshals while they moved on. While doing four flips of the mud and water filled tires, I can tell you that the reduced or complete lack of that workload would impact your race performance. Placing the flip much later in the race or had more bodies to keep in check until the Elites passed.

Twister was definitely fun to take on, and this seems to be an obstacle from OCR World Championships. This iteration is more dependent on muscle memory to get through. The grab holes are a bit small, but once you knew where to go, even with three sections it was very doable. The barbed wire crawl was something even Norm would have been proud of. About 100 yards and three large berms filled with cacti and other barbs to grab you as you pushed through defiantly marked the experience. You hit the dunk wall right before your final ascent up to the finish where the Hoist and Ring Rig awaited you. The rope climb was at the end and, honestly, was a testament to the challenge this course provide as many would get the rig and then just walk to the rope and sometimes even camp out a bit before trying it. I saw many go straight to the burpee zone. Spartan again showed that a creative race director could make a venue memorable, and the challenge you are looking for.

The time trial was fun to watch. At about two-thirds of a mile, it had the OUT, Olympus, the Yokohama Tire Flip, Hoist, Ring Rig and Rope Climb in an action-packed 6 to 10-minute race. Watching Isiah and Michael Mark battle it was something else and time permitting, I’d like to give a time trial a try sometime. This seems to be what Tough Mudder thinks with their short course take with TMX. 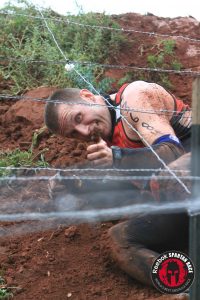 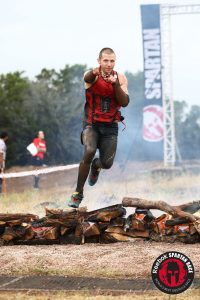 Overall Spartan did a fantastic job reinventing their Austin event. They put on a quality event that has areas of improvement, most of which seem to be ones that could be easily addressed. Issues with registration is an area that needs to be addressed. It has become a common theme I hear from many of their events. The “flexibility” their system provides does not make up for the diminished racer experience it is commonly causing. The course marking is something that plagues anyone running an outdoor event, so I won’t beat them too badly for that. All in all, if you are looking for an extra Super in 2018, Reveille Peak Ranch would well be worth your time.

Chris is an OCR United Junkie, endurance event nut (BFX, UB,12 Hour HH and 24 Hour GBCs), multiple Killington Ultra Beast Finisher and multiple Trifecta holder. Also loves running The various Green Beret Challenges, Conquer the Gauntlet while getting #SAF and any other races or challenges people throw his way. OCR helped him lose over 100lbs and wants to help spread the amazing abilities this sport holds. He now tries to pay it forward by sharing his knowledge with racers and the races series we all enjoy.
@WarPaintWaldo
Previous Green Beret Challenge 24 Hours Survive and Evade
Next OCR Chicks – February