There is one race series I look forward to every year, Savage Race. For me, Savage Race usually provides me with the best race experience of the year. Last year, I was lucky enough to participate in both Albrightsville and the Maryland races, but this year, I had only the PA race on my calendar. I can comfortably say, and defend my position if necessary, that Savage Race puts the racer’s experience above the bottom line, making it a must run race. While everything isn’t always peaches and cream when it comes to putting on and running an event like the ones we all love to run, there are times when your customer services skills hat must be worn. Some wear it proudly, some don’t even let you know that they have one. This year, in this race, I got to see first hand what Savage is made of. 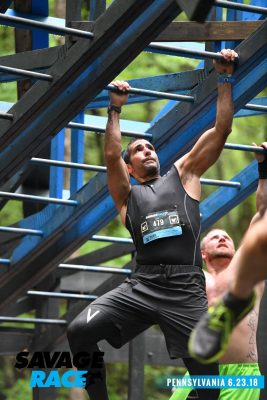 The race in Albrightsville is held at Skirmish, the paintball place, in the middle of nowhere. When I say the middle of nowhere, I mean it. It is desolate. There is a lot of land for those with broad brush strokes to paint a picture of OCR. Although some of the obstacles are always in the same place, Davey Jones’ Locker and Sawtooth, the rest are strewn about the course in a way that maximizes operational efficiency while providing enough running room to keep you just tired enough to fail a few of them.

If you are interested in the typical race recap, the only thing I can tell you is that there are miles and there are obstacles, none of which are easy. The pro wave, the wave I participated in, was the first to take off. It is early in the morning, the parking lot is accessible, the temperature is low, and I am a bit groggy from a poor night’s sleep.

Somehow, somewhere along the line, the course wasn’t marked very well. We found our way to the Big Ass Cargo net ahead of many of the other racers being directed back into the woods. We were told that we had to add some miles. WHAT? You mean to tell me that somehow we took a wrong turn and we would have to run what essentially would turn out to be a penalty loop? Yep! We were directed to run over terrain that we had already seen before, all the while frustrated and trying to figure out where we went wrong. We found ourselves at obstacles we had already completed, running over miles we had already run, 2 miles give or take. At this point, my wristband (It’s no longer a wristband, but I will continue to refer to it as one because I am old and stubborn) was still on me as I mounted the hurdles again and took to the Savage Rig over water one more time (as we were welcomed back on the proper course). 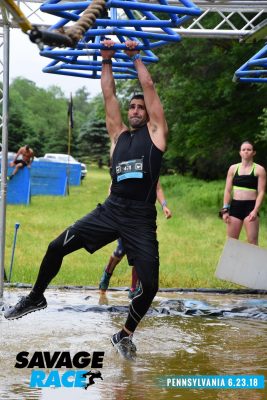 I knew my chances of hitting a podium were gone, I mean I just added 2 miles to the course. I found my way to holy sheets and failed my first time through. I failed my second time through. I looked down and figured there was no chance for me, so I turned in my wristband, and kept it moving. I mean, with the extra miles, I had no hope of hitting an age group podium right? Turns out, had I kept my band, I could have hit the podium; that was the only obstacle I failed, and it also turns out that many of the other racers had run the “penalty” loop as I had.

When the race was over, I couldn’t say that I was unhappy, the race was Savage… I was a bit disappointed that I turned in my wrist band over what amounted to purely just frustration.

Then, I heard them calling over all pro wave racers… they wanted to tell us something. They told us that they had pre-run the course and had gotten lost too. They thought they had addressed it properly and were apologetic about it. They informed us that somewhere in the neighborhood of 100 of us had made the wrong turn. They said this wasn’t the “race experience” we expected and the experience they expected to provide to us. Then, they did what I would consider the unexpected… They gave us all a free race. You heard me right, they put their customer service hats on and did what they felt was the right thing to do for us. At that moment, I was reassured in my belief that Savage puts the racers before the bottom line… and it is this reason that I am bringing four more athletes with me to Maryland to participate. Four more paying customers are participating in a race with me, that would not have run Savage this year. Turns out doing the right thing, not caring about your bottom line, affects your bottom line after all.

Savage Race, I want to thank you for thinking of your racers and caring so much about their race experience. I only hope that the message you are delivering time and time again can find its way into the business practices of other events and organizations. This one act of customer service, while small, is what is rare these days. Your belief in providing a top notch experience, and taking responsibility when there is a mishap, is what will drive me to steer more and more people towards your events. My hat goes of  to you, because you put yours on.

Fitness and sport enthusiast. Spartan Race Junky. I have been a martial artist since the age of 4 and addicted to anything challenging. Years of Martial Arts training provides the ability to keep going when my body really wants to quit.
Previous Let’s get vertical! Vertical Playground 2018
Next Spartan Ultra Killington 2018 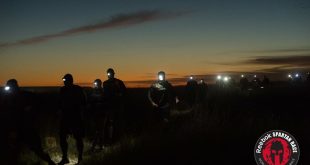 What initially started as an idea from listening to the OCR community, turned into OCR research. That research led to conversations with Joe DeSena and team. Almost 2 years later, those conversations turned into the new Ultra Beasts of 2017. The location that was the genesis of these new races was Rough Creek Lodge in Glen Rose, Texas. On October 28th, the Ultra Beast arrived in Texas with the weather flare we have all become accustomed to.