A trip around Circuit of America’s Grand Prix race course – how bad could it be? Seems simple enough. Bonefrog was kind enough to find a centrally located site to the Texas Metro areas. Some hills but nothing that comes off as too drastic. Oh, they now have that #EffNorm charm? There’s no mountain so he’ll be neutralized. It is April so it will be comfortable. Oh, wait, it is going to 90+ degrees with 80%+ humidity? Okay, this will be an interesting 12 miles or so. 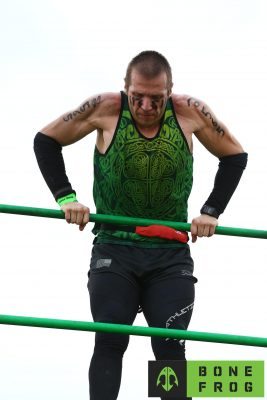 Bonefrog Austin was my first venture in a different SEAL view on Obstacle Course Racing. I have heard varying opinions with the dominate thought being their Massachusetts course is a must for any racer. Once they left that mountain, the experience was enjoyable but did not have that Battlefrog (may it RIP) intensity. I went in with a pile of unknowns though and that helped me keep my expectation unpainted so I was ready to take it all in. It is an aspect of the experience I am very grateful for.

Parking was a breeze since Circuit already had the parking lots for their events free for their use. Not going to lie, knowing I was going mudding made things calmer for me after the wet spring had already made thing eventful. Check-in was very efficient and I think this is the method or process Terrain, Spartan, and others are trying moving to. They simply scan your license or input your name, attach a bib number to your start time and off you go. Once you get to an attendant the process was under 60 seconds. Plus they had a 2-hour window on-site to pick up your bib made things from what I could tell much easier for those who had to pick up thing on race day. 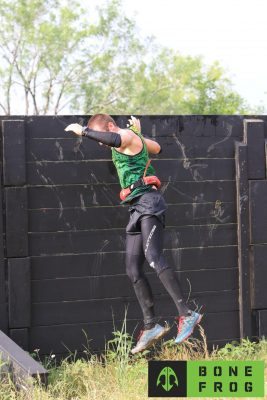 The festival area was very nicely put together, rather wide open to get loose and enjoy yourself. They had Mylo’s Obstacle Fitness, the NAVY, ROTC group, Hesco and festival games setup. Good mix from the DJ went from pump up music to good open air tunes to keep things balanced and there was a legit buzz in the air. Plus having real water fountains, bathrooms, etc. was a privilege almost everyone brought up, so it was a solid win. The only complaint I heard was the food choices and that’s was because of Circuit I’m sure.

I decided to do the Tier 1 route, Bonefrog’s toughest wave (until their Endurance wave premieres) because when one decides to run impulsively, why not choose the hardest and longest option for the first hot and humid weekend of the season? Making me long for September and October even more, Coach Pain was there to get us in the corral and all kinds of fired up and ready to roll. “We are not elites. We are now here to Battle”. Words that will ring in my head all season long. It fits us all whether you are in the competitive waves or the open waves. We are there to dig down and battle the course for the best possible result for you. 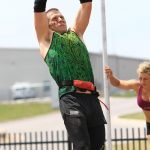 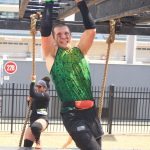 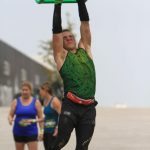 Now, this is where the fun begins this was a hybrid course for sure, meaning it was not all trails but it was not a street challenge OCR either. About 60/40 dirt to asphalt to mix it up. I am not going lie without my Icebugs and their performance Insoles (10% off with OCRAddict at checkout) I wouldn’t have made it. They were a life saver and I saw a lot of racers having to stop because of the pounding from the asphalt while running in OCR shoes. Norm worked us in and out of bleachers like only he could, creating false ending after false ending. As we worked our way into the trail, that is where my one of two issues with the course came into play. The course could have been marked better or maybe possibly the wind the night before messed with marking but numerous racers myself included were thrown off course or would have to stop and look for the pink ribbon that had wrapped itself around a tree. A thicker ribbon and/or a Bonefrog direction arrow would have made all the difference in the world as well as being a pretty common mainstay of races. The second was for Tier 1 you run a Challenge lap and a Sprint lap. The volunteers were not up to speed on where to send each as there was a place where Sprint, Challenge, and Tier 1 racers starting their Sprint lap all converged. I heard reports of Tier 1 ones never doing their Sprint lap, some doing two Sprint laps, etc. That maybe a venue specific problem but needs to be addressed in the future either way especially with Endurance debuting shortly. 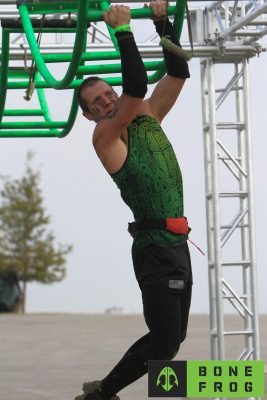 The obstacles were all solid construction and had a bit of complexity to them to complete. They had the Drunken (Offset) Monkey Bars, Dirty Name, Hell’s Gate along with some brutal simplifications to rigs. I think my favorites were Strong Hold and the Rope Swing – the unbalanced nature of Strong Hold made you stay balanced and who doesn’t like straight up Tarzaning across a water hole? Then there was Norm being Norm as we were given 25 flights of stairs. And who would not expect him to find a way to send you up there twice. I saw that take down a lot of people but the view at the top was breathtaking even if I was up there for 10 seconds at a time. My greatest lesson though was to never underestimate heat and humidity together. Be sure to have plenty of fuel, electrolytes, and water. I have never had cramping issues before but those extreme with all the vertical climbing had me hurting. Know your body but know your conditions as well. It will save you loads of pain.

All in all, Bonefrog put on a solid event that initially I was skeptical about because of the venue type. They blew away any reservations I had and I will gladly sign up for Bonefrog in Texas. In fact, I want to make it to an Endurance event and maybe the crown jewel in Massachusetts. They handled their business in a way you would expect of our Warrior Elite. The swag and medals are of the utmost quality. Add in a few more food choices and it would have everything I dream of. If you have not given Bonefrog a try, get it on your race schedule. They are worth a flight and your sweat equity! Come retrace my Tier 1 steps with our YouTube video. 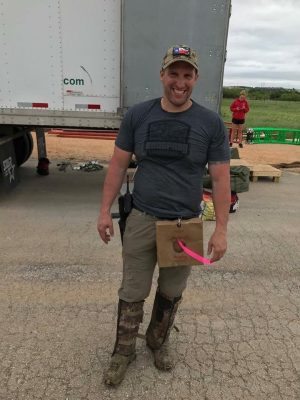 Chris is an OCR United Junkie, endurance event nut (BFX, UB,12 Hour HH and 24 Hour GBCs), multiple Killington Ultra Beast Finisher and multiple Trifecta holder. Also loves running The various Green Beret Challenges, Conquer the Gauntlet while getting #SAF and any other races or challenges people throw his way. OCR helped him lose over 100lbs and wants to help spread the amazing abilities this sport holds. He now tries to pay it forward by sharing his knowledge with racers and the races series we all enjoy.
@WarPaintWaldo
Previous MTS Nutrition Peak Physicor Review
Next Rise of the Sufferfests Review