If you have ever competed in a long race, or plan on running one (cough upcoming NJ Ultra Beast), you may be asking yourself if you should try a hydration pack… and which one is the right one. While your personal requirements for one may vary, there are plenty of options to suit just about any need. Personally, I have yet to NEED one while running, but there have been plenty of times when I wished I had one. Having seen folks running various race distances with hydration packs, I set out on a mission to find the best options, enter the Geigerrig Tactical Rigger.

After having run the most recent Killington Beast, I found myself skipping past the water stations, either because the wait times were utterly ridiculous or there was no water (Water-less Saturday, there was just no water to be found – Sorry Spartan, you missed the boat there, pun intended). Although I did not suffer from dehydration during the race, I surely would have appreciated some water from time to time.

For me, the thought of carrying extra weight around with me doesn’t seem ideal. Additionally, having something that adds 3 inches to my profile seems like it could quickly become an obstacle in itself.  I don’t consider myself a minimalist, but the less I have on me, the better I feel. 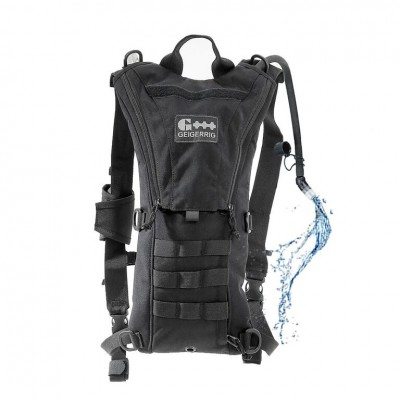 With so many options on the market, I decided to give Geigerrig the first shake and the Tactical Rigger got the first nod from their vast lineup of hydration systems.

First off, let’s get some of the technical specifications out-of-the-way. The Tactical Rigger is manufactured from 500D Cordura fabric in either Black or Coyote flavors. This fabric is extremely strong and resistant to tears and abrasions. It also sports plenty of D-Rings, Molle up front and around back, and it has room for carting some accessories or food around with you. The Rigger features an internal shield to help protect the reservoir from impact damage or puncture. 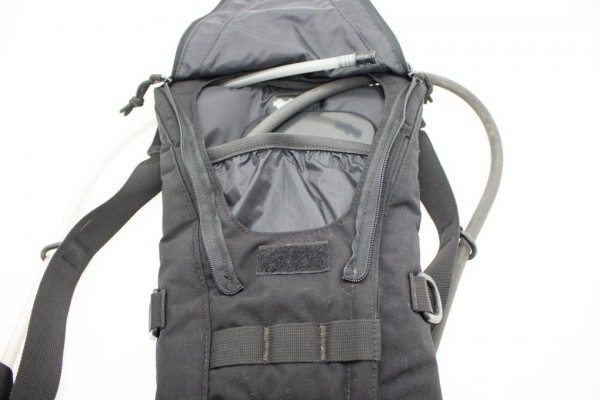 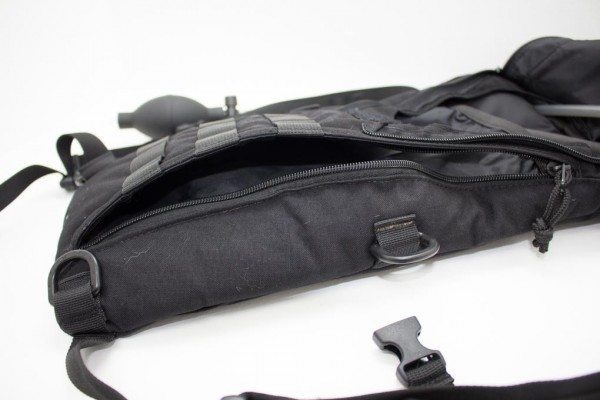 The front of the Rigger, or back depending on your point-of-view, features a prominent flap that provides access to the internals. The flap is kept closed by zippers on each side and a Velcro strip at the bottom just to make sure it doesn’t accidentally release. If you are the type that is in to patches, there is a Velcro strip along the top for you to personalize it a bit.  If I could only find my Mighty Mouse Patch… 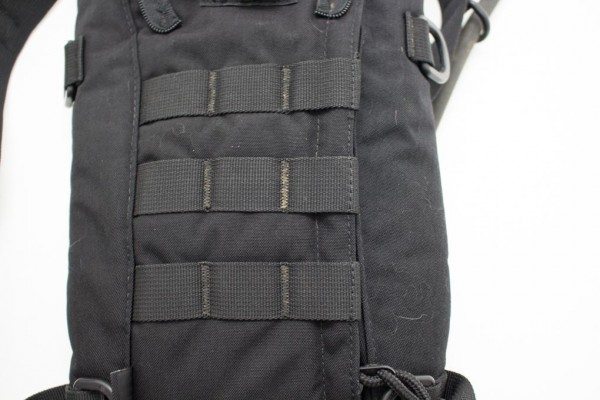 Just below the flap are three strips of Molle for carrying additional accessories. This space also reveals a zipper on the side that exposes a large pocket with a good amount of volume for carrying snacks, gloves, etc. Unfortunately this space isn’t completely sealed, there is an opening at the top of this pocket through the reservoir flap. Just be careful not to do much upside down, you may risk losing something. 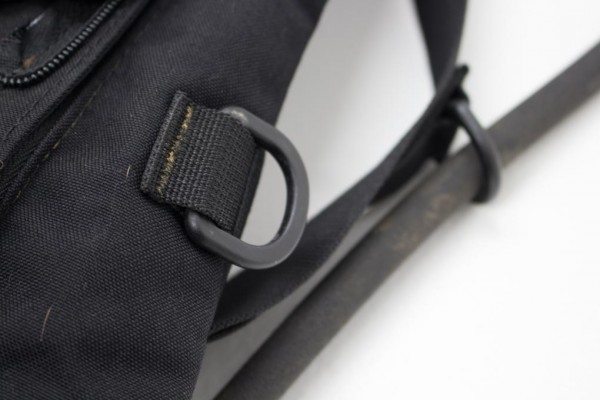 Either side of the Tactical Rigger sports a pair of plastic D-Rings, two on each side for a total of four. Yeah, you read that correctly, they are plastic. Although we didn’t get to price yet, this rig isn’t cheap, I would have expected something a bit more durable than plastic given the premium price tag. 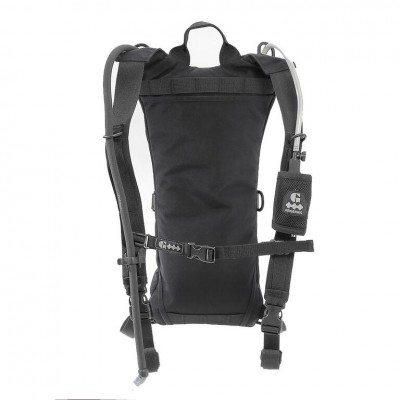 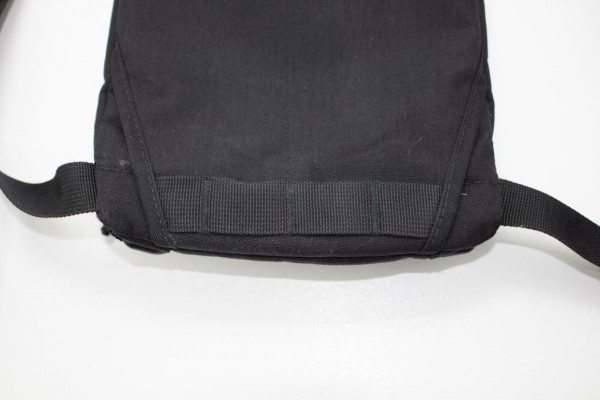 The back of the Rigger is plain, nothing to see here. The straps are completely adjustable and each of them feature two D-Rings as well as quick release clips. Geigerrig also outfitted the Rigger with a chest strap to keep this rig from fumbling about while running. The top of the straps reveal access holes for the mouthpiece and the pressurizing system. 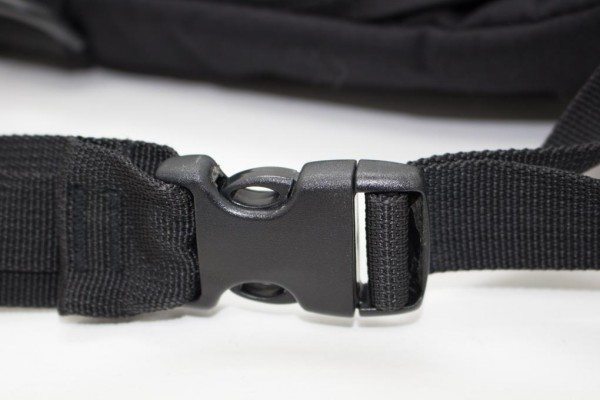 This pack takes the Need for Speed approach when it comes to securing you inside it.  The three-point system sports two straps, one over each shoulder, and a strap that spans the middle of your torso.  When fitted, the system is snug and movement is unencumbered.  Each strap features a quick release and can be adjusted to fit most people… even my 6’6″ 320LB friend… (we call him Tiny, for obvious reasons).

Both of the shoulder straps sport 4 of the same plastic D-rings found on the sides to route the tubes for the mouthpiece and the pressure bulb.

Some of the features that set the Tactical Rigger apart from much of the competition is the pressurized hydration system.  This allows you to force water through the drinking tube.

When opened, the hydration engine and the inside pocket are revealed. The hydration engine is kept in place by a patch and hook system that works better than expected. At first glance, it doesn’t appear that this will be very effective, but the system is surprisingly simple and it works. 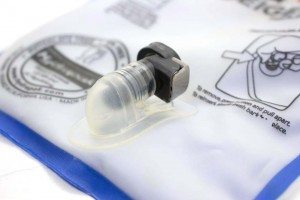 Each of the aforementioned tubes sport a quick release valve so that you can remove the reservoir without having to reposition everything when filling or refilling.  One tube for drinking, spraying, etc, and one tube for the pressure bulb.  The quick release system makes attaching an inline filter simple.  Our rig was not outfitted with a filter. 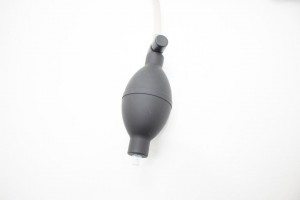 The Power bulb allows you to quickly pressurize the engine for a burst of liquid.  A few quick squeezes to fill the air chamber within the engine and you have a pressurized stream of water coming from the nozzle.  Luckily the Power bulb has a depressurization button for relieving the chamber which makes disassembling Johnny 5 easier. The mouthpiece has a simple twist ON/OFF function to keep you from depleting your water supply on accident.  Although the system is simple, wet muddy hands turning the switch for clean water isn’t ideal. 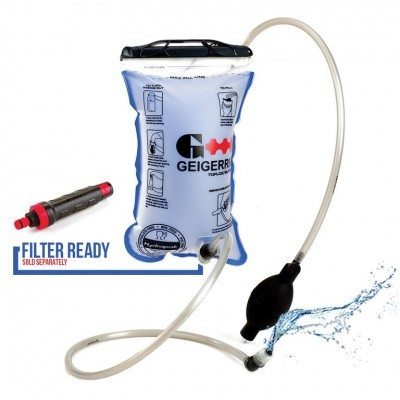 The Tactical Rigger ships with a 2L (.24 kg / 70 oz.) reservoir that measures 12″ by 7″ but the pack can also accommodate a larger 3L option for serious endurance events. . They hydration system itself is magnificent, this is truly where the magic happens.  The hydration engine features a pressurized reservoir that can provide the essential wet stuff with little effort.  With pressure, you can spray to clean, share (no one likes someone else’s mouth on their mouthpiece), and drink.  The reservoir itself is BPA and PTHALATE free, it is reversible, and dishwasher safe.  The Engine sports a HUGE mouth for quick fill with water, or water and ice.  This large opening also makes cleaning the engine a breeze. When the show is over, cleaning your hydration engine shouldn’t require a degree in astrophysics.  The Geigerrig Hydration Engine is dishwasher safe!  Just reverse the reservoir (pull it inside out) and throw it in with your coffee mugs.

Unlike traditional hydration packs, because the system is pressurized, you shouldn’t really have to worry about mucking the drink tubes up as much as there is no backwash.  That means there is always a fresh stream of clean water running through your drink tube.  The pressure tube (connected to the power bulb) never sees any water.  However, if it strikes your fancy, you can drop a small amount of dish soap in the full reservoir, pressurize the system, and run the system until you feel clean enough.  To dry, pressurize the system, switch the hoses around and run air through the drink tube until you feel comfortable.

Now that we have all the T’s crossed and I’s dotted, you may be wondering how this hydration system actually performed.  For the down and dirty, I decided to go break away from my norm and strap this sucker on my back for the SC Spartan Beast (Read our review of the SC Beast).

The idea of having an extra 6-8 lbs on my back while running through muck and mud for 12+ miles isn’t exactly my idea of a good time.  While the Tactical Rigger sports a 3 point system to keep the pack firmly strapped on my back, it does wiggle around a bit.  Having never run with a pack on prior to this, experiencing a constant tap in the bag of the head became a bit of an annoyance.  Then I really tightened the straps down… problem solved.  Well, almost… Burpees were still an issue, but the pack was almost unnoticeable after the proper adjustments have been made.

The pack’s storage features came in extremely handy, having worn shorts without pockets. The internal compartment was large enough to hold enough energy packs for the race and still keep a hydration engine full of the wet stuff.

While I didn’t require much in the way of hydration, I did want to experience filling the reservoir.  Having only taken a couple of sips, I decided to empty the reservoir and refill it at a watering hole.  With that, the process isn’t exactly easy.  Your muddy hands must unhook the hydration engine from the pack, slide the sealing bar off, hold the reservoir open then reverse the process to get it back together (without any extra pieces).  Not exactly the easiest system for mid-race refill.  Ultimately, the system is not as easy as some other hydration packs to fill and refill, but it is much easier to clean that those because of the slide seal… 6 of one, half-dozen of the other.

Although the Geigerrig offering doesn’t exactly excel in the refill department, it can take a serious beating.  The 500D Cordura fabric seemed indestructible.  At one point during the race, I got so entangled in barbed wire that two of my fellow racers had to perform a series of calculations to free me.

All in all, having worn the Rigger on the course to review instead of testing it in the lab, the real world experience leaves me nothing but impressed.  While the device does suffer when it comes to refill, it really is one tough cookie.  The hydration engine is second to none and the durable 500D Cordura fabric is fantastic.  Although D-rings haven’t proven useful for OCR, they do have their application in other sports.

The pack proved to be quite comfortable once I tightened things down, almost forgot about it while running.  At least until I got stuck in the barbed wire.

If I had it my way, there are only a couple of things I would like Geigerrig to address.  Although the Hydration Engine is spectacular, I really would appreciate something a bit easier to refill on the move.  Additionally, I would have preferred a valve a little farther up on the drinking tube instead of right next to the mouthpiece. Lastly, for something that retails for right around $120 USD, I would like to have metal D rings instead of plastic.

Oh, quick tip… clean the hydration engine before you run with it… I felt like I was licking a pool liner every time I took a sip. All in all, I can honestly say that I am thoroughly impressed with the Geigerrig Tactical Rigger.  The pack is durable, affordable, and comfortable to run with.  Bottom line, would I buy one? Yes, and believe me, this rig and a 3L reservoir will be on my back for the NJ Ultra Beast. Shop Now
User Rating: Be the first one !
Share

Fitness and sport enthusiast. Spartan Race Junky. I have been a martial artist since the age of 4 and addicted to anything challenging. Years of Martial Arts training provides the ability to keep going when my body really wants to quit.
Previous Warrior Dash Austin 2016 Review
Next I’m Never Doing Another….Just signed up for my 4X…. But Why Shop Now
User Rating: Be the first one !