This past Saturday I decided to participate in the Terrain Race at Englishtown (very convenient being that it’s about a 20-minute drive from my house). Since they had advertised that kids 7 and up could enter the adult 5k course, my husband and I took advantage of that opportunity and had our 7 and 10-year-old run with us. And, for the price of the registration, we figured it was worth it to try.

The morning was kind of hazy- was supposed to get thunderstorms, which thankfully did not occur until after all the racers were done that day. Parking was a breeze. I’ve been to other OCR’s at this venue and have usually had to park a bit away (always walking distance though). Parking was right next to the venue and check-in, which was convenient (when you have 2 kids, walking any extra steps involves whining).

Check-In…pretty quick and easy. The volunteer took our waivers and gave us our packets. I did like how the t-shirt and bib number were already in a nice, sealed package to have. It’s nice not having to be muddy and getting your finisher’s shirt afterward. Next step- checking our registration. I did see that most people were using their phones for this process- I also was using my phone. I found it pretty smooth and easier to have the barcode on my phone to check-in. No need for carrying my license or anything else into the race (which of course, being a female I brought it with me anyway). Only the Elite and Competitive racers received timing chips. Since we were not racing either division, we didn’t have to worry about this (kept time by my watch).

The venue was pretty open. You were able to see the last 2 obstacles pretty close-up. And, there was a mini A-Frame/Cargo net for, I’m gathering, kids to play on (which mine did- over and over again). I did see a photo area where it looked like they were charging $5 for photos (we did not do because I’ll admit it- I can be cheap). 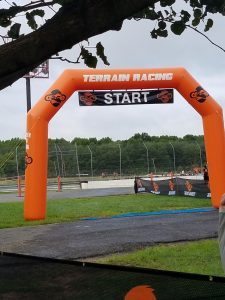 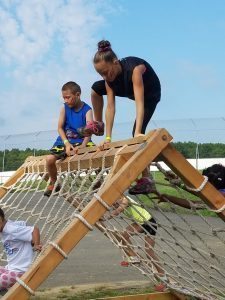 The race begins with the runners climbing into a pool. For short people, it could be a little challenging. My husband had to hold our son because he’s only 4’2″ (he’s 7 years old), and he was having a hard time standing up. MC does his little thing- which I couldn’t hear a single thing he said. Seemed like a nice enough guy, but his pre-race talk did nothing to pump up the racers. At 9:30 in the morning, I could’ve used a little pick-me-up speech (Coach Pain of BattleFrog would’ve been a God-send for this).

Out on the course. Nice little jog on the course before we started to hit obstacles. The nice thing about this course is that the terrain is flat. For those with knee issues, this was a great change from the grueling inclines of Spartan. There were a few obstacles pretty much back to back. The obstacles were fairly easy. I wouldn’t let my kids do the A-Frame/Cargo net obstacle due to the fact that their faces were of semi-terror (this was their first adult course). I let them stand off to the side as the husband and I flew through this. The next few obstacles were fairly easy as well and the usual for OCR’s (monkey bars, wreck bag carry, rolling mud pits, etc.). Part of the course went through the deeper trails of the Raceway Park. There was a section where racers had to wade through sludge. And, I say sludge because it smelled like the sewer and was clay-like mud (I felt like we were in the Neverending Story where Atreyu is pulling Artex through the mud). Again, shorter people might have found this a challenge. I had to hold my son’s hand through this as the terrain under the mud had some dips. Knowing this section of the course from other races helped- I had the little guy hold my right hand and had him grip the tree roots on the side with his left hand.

Once you came out of this area, there was a little run and then 2 different walls to climb. To the right was for the 5k runners; to the left (the higher wall) was for the 10k runners. You really had to read what was spray-painted on the wood because you could barely see the markings (no volunteers here to inform you). Since we were doing the 5k, off to the right we went. 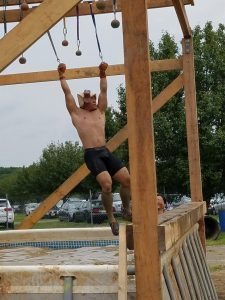 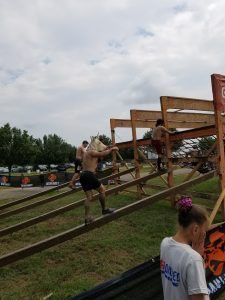 The best obstacles for this came at the end. Once you ran out of the wooded trail, you came back out into the “festival” area where the final 2 obstacles were- the Monkey Balls and then the inclined balance beam. Then onto a cargo net, and then down a fireman’s pole. The kids loved the fact that the monkey balls were over a pool of water. Needless to say, the kids just climbed up and then jumped into the pool (Hey- they deserved it considering they did a great job on the course and did every obstacle except the one where Momma-Bear was over-protective of them). Unfortunately, I did not conquer the monkey balls but came close to it. I did see a ton of racers continually trying to conquer this. After this obstacle, it was on to the balance beam, climb or roll through the cargo net, and then down the pole (which apparently I stink at because somehow I got down the pole and fell flat on my rear). At this point, you received one of the best medals I’ve seen or received at any race- a freaking spinning monkey head medal. 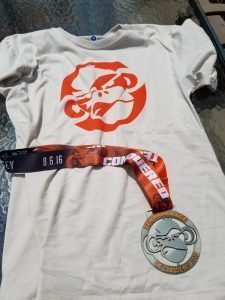 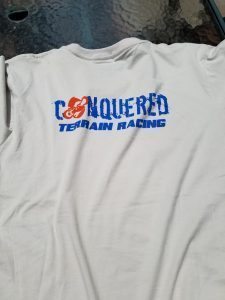 I did speak to some racers who did the 10k portion of the race. To quote one racer, Joe Triano (and also one of my co-worker’s)-

No food or recovery supplements at the finish, just cups of water the guy was filling with a hose.
My opinion is this is a low end no frills set up, even the event area had hardly any vendors or food.
The swim obstacle, no life guard or safety equipment just a kid with his hands in his pockets and no radio.
The empty bucket carry was a waste of time.
At registration I was given the wrong wrist band for the elite wave.
Parking is easy but like all the races they charge too much.
The T-shirt is very plain and not that attractive.
The metal is cool seems to have some quality to it.
The course was well marked.
The obstacles were good in general but nothing really different. Mostly wall climbs and cargo nets.
The start line with standing in the pool was interesting, soggy way to start, the MC at the start line was not the best either, I thought he could have done a lot more to pump up the crowd.
I did like the fact that for $15 you could run as many laps as you want.

A few of his comments I heard from other racers as well. I heard a few complaints about no banana or anything once you crossed the finish line (not a biggie for me because I don’t eat bananas). I did hear from another racer that there wasn’t a lifeguard or anything at the swim. I don’t know how deep the water was, but common sense is that you put a lifeguard there and give the volunteer a radio should something happen. Joe’s complaint about the bucket carry was because he stated that the buckets were empty. I heard from other racers that the buckets were supposed to have water in them. My opinion- lame. Either put something substantial in them or not have it.

Water stations were another complaint I heard. Now for me, 1 station on the 5k was fine. Luckily for us, we had our hydration pack for the kids. At the water station, they only filled the tiny cups (smaller cups than what I normally see at races) halfway. If they did it like this over a fear of running out of water (it was sunny and humid), then they should be better organized with having more water in the future.

Overall, I had a great time and so did my family. For the most part, I only heard positive things about the race- especially how it was very family oriented. 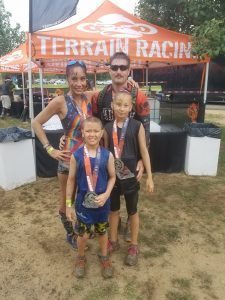 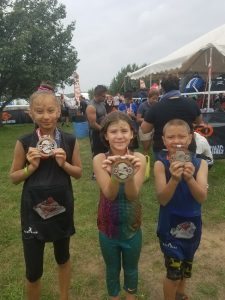